The nature and attributes of God ought to be considered one of the fundamentals grounding each doctrine of the Christian faith. In recent years there has been a debate between classical theists and theistic personalists. It is my contention  this debate touches not only on theology proper, but the doctrine of creation and our confession … END_OF_DOCUMENT_TOKEN_TO_BE_REPLACED 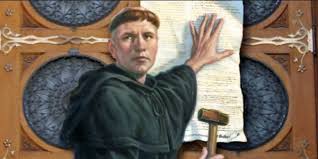 During my doctoral studies, I first read Luther’s Disputation Against Scholastic Theology. Nearly everyone who studies theology is aware of the fact that Luther was trained in the Scholastic method. They also know that Luther and Protestantism broke with the Roman Catholic Church over doctrines such as sola Scriptura and sola Fide.

However, to my surprise and bewilderment at the time, I was shocked to see that Luther wrote an entire Disputation Against Scholastic Theology. This disputation is clearly not as famous as the 95 Theses; however, one could argue that both are probably just as influential to one’s understanding of Luther’s theology, method, and exegesis. In that same vein, understanding this disputation is also important to understand the specific epistemology, metaphysic, method, and modus operandi of later Protestant theologians (some, but not all). In other words, if anything is clear in the writings and method of some theologians, they were trained in Scholastic theology and they willfully and intentionally broke with that method. … END_OF_DOCUMENT_TOKEN_TO_BE_REPLACED